Following the assignment to relocate the building in Duiven, Alliander’s headquarters in Arnhem also needed to be thoroughly renovated. The renovation’s requirements included energy neutrality, circularity, making use of the area and the application of new working methods. Copper8 was asked to shape a design challenge to strengthen the ambitions.

The parties that won the maintenance contract (architectural and installation) were asked to come up with a design. The idea behind this approach was that the parties would benefit from a good design during their maintenance contract. The most important question was whether these parties included the latest sustainability and circularity innovations and developments in their preliminary design.

Organize a ‘challenge’ in which techniques and innovations can be put forward to strengthen Alliander’s ambitions. Also develop an assessment framework against which the proposed ideas can be tested.

The ‘challenge’ had to take the interests of both the existing design team and the ‘challengers’ into account. How could the parties, with potentially opposing interests, cooperate to come up with a better design for Bellevue?

The ambitions for the renovation were first clearly defined and turned into objectives. With the existing design team, the preliminary design (in Dutch: voorlopig ontwerp, VO) was tested against the objectives. Parties were then selected to think about the ambitions, and they were asked to submit concrete suggestions for improvement that would better align the Bellevue design with the company’s ambitions. With these proposals as a starting point, choices were made on the basis of their positive impact on the design, and to what extent they would better align the renovation with Alliander’s ambitions.

The challenge resulted in five scenarios. The measures involved in each of the five scenarios were mapped to determine their impact on the objectives, and we looked at the extra investment that would be needed for each scenario (if applicable).

The chosen scenario has resulted in a further reduction of the CO2 footprint while maintaining circularity. In addition, an option was chosen with a positive effect on stimulating the new forms of work. 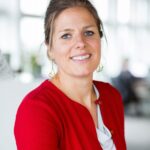 Cécile van Oppen Co-Founder
“When we were getting started on this challenge, it was important to find a common interest between all those involved: everyone had to understand what we were doing, what we wanted to achieve as the client, and how they could contribute to that. From that starting point, the parties had to want to work together, want to be part of the result and be intrinsically motivated to get the most out of it. Copper8 was able to create that common interest and motivate everyone involved to get the best out of themselves and, even more importantly, from the cooperation.” Dennis van Wieringen Strategic buyer