Last Sunday, 3 May, was our ‘Country Overshoot Day’ in the Netherlands. It’s the day of the year when our collective Dutch footprint exceeds the biocapacity required to meet our needs. But now that the global economy has been brought to a standstill by the Coronavirus, a question arises: what does this do to the already calculated ‘Country Overshoot Days’?

Every year I eagerly look forward to the Global Footprint Network’s calculations, revealing when ‘Earth Overshoot Day’ is, as well as when we reach our ‘Country Overshoot Day’ in the Netherlands.

I think these Overshoot Day calculations are a very effective way of communicating how oversized our footprint is in the Western world. After all, there are countries where the situation is reversed – where biocapacity exceeds the footprint. These countries have a so-called ecological ‘reserve’ (which is shown in green on the map below). To be clear, as this map also shows, the Netherlands is deep in the red. 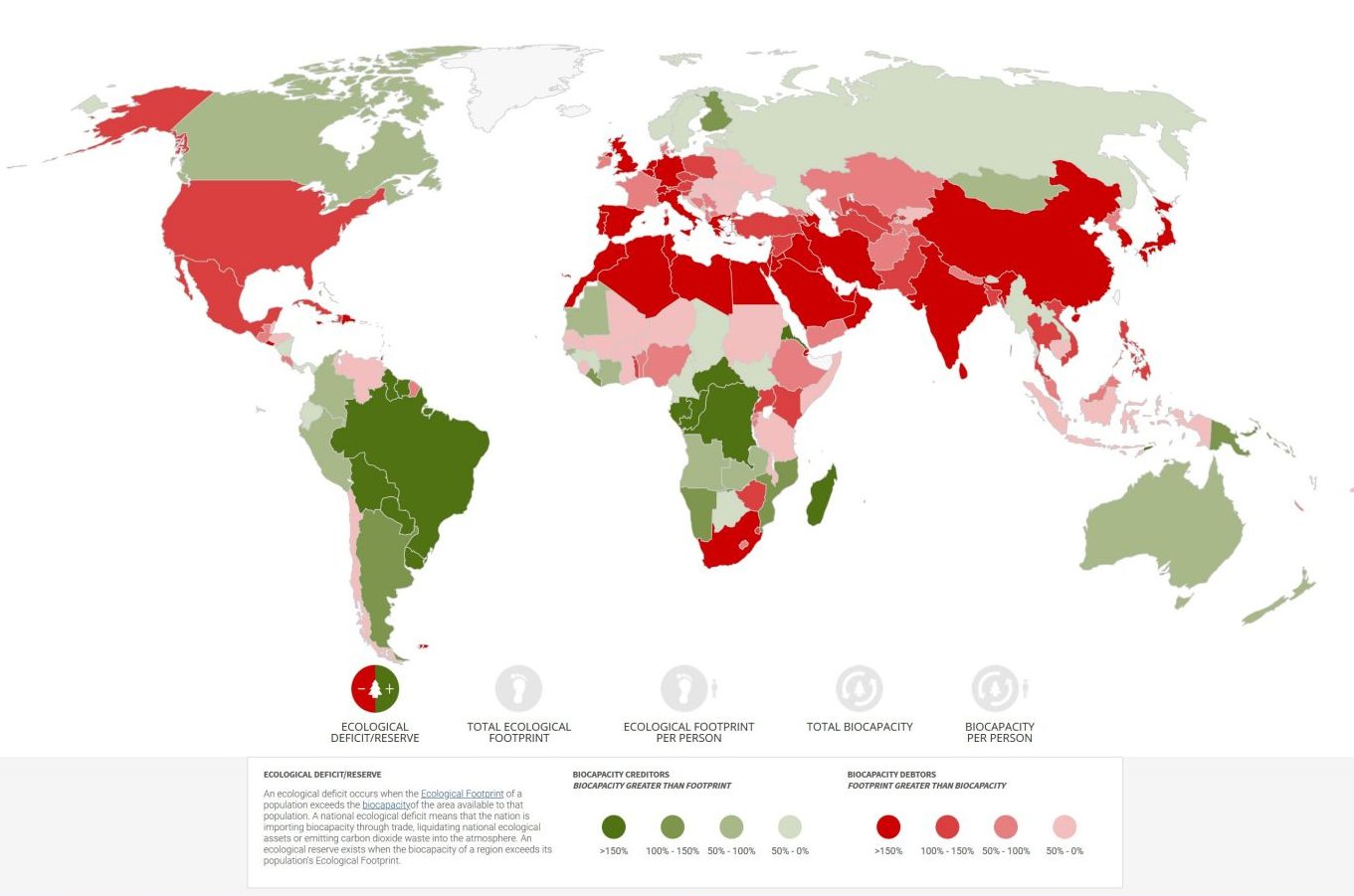 The question of what the global pandemic will do to these calculations is also one the Global Footprint Network itself is concerned with. The assumption is that the Coronavirus has reduced our global footprint.

In order to analyze the effect this could have on the Dutch Overshoot Day, it is important to delve into the methodology and to look for data points that have shown a deviation in trend since the Coronavirus pandemic began.

First let’s look at the methodology, which consists of two meta-indicators:

Second is the question of how these meta-indicators change as a result of the Corona crisis. A disclaimer is needed here: our research confirms that it is extremely difficult to find current data on some of the relevant factors, such as consumption, import and export. Many global databases can take two to three months to come up with current figures, and – ‘luckily’ – we have only been in this situation for two months. Nevertheless, we consulted several reliable sources in order to paint a picture of the Corona Country Overshoot Day for the Netherlands.

Our biocapacity is likely to remain the same. According to the Global Footprint Network’s calculations, in 2020 biocapacity will amount to 0.8 Gha per person for the Netherlands.

To calculate the footprint, we need to look at the ecological footprint that goes along with our consumption. This was originally calculated to be 4.8 Gha.

Although it is challenging to find out recent consumption figures, data on consumer confidence from Statistics Netherlands (Centraal Bureau voor de Statistiek, CBS) provides a realistic picture of how our average consumption will change. In April, CBS reported the ‘biggest ever drop in consumer confidence’, falling to -22! ING’s figures(in Dutch)  for the number of debit card transactions tell the same story: up to 27 April, the total number of transactions had decreased by 22% and turnover by more than 18%. As lockdown measures become more flexible, a slight increase is expected, but this has already had an effect on our national footprint.

To calculate the footprint, it seems generally wise to search a level deeper for relevant developments. The Global Footprint Network calculates the ecological footprint of consumption as follows:

To investigate this, I dive into three sub-indicators:

So a deeper look into the figures for the footprint leads us to a more positive picture of a number of indicators; after all, our consumption, production, and imports are decreasing. At the same time, reduced exports, particularly those that can’t be ‘balanced’ due to reduced production (for example, in agriculture), have a negative impact on our total footprint.

The Global Footprint Network shows that the footprint is a reflection of GDP. At the end of March, the CPB released four scenarios for GDP, in which GDP contracts between 1.2% and 7.7%. If we take the CBP’s fairly optimistic second scenario, which predicts that GDP will contract by 5% in 2020, the Corona Country Overshoot Day ends up being 15 May 2020.

The current economic shrinkage has led to a ‘better’ Country Overshoot Day, but I find the difference relatively limited. Despite the brake being put on the economy, we are not yet making big strides forward. And, perhaps more importantly, the economic shrinkage is anything but a conscious choice. If we want to structurally commit to an economy in which we remain within our planetary limits, we must also dare to look at the structures that sustain growth, production and consumption. Because I’m not satisfied with just ‘accidentally’ doing a little better.

Stay up to date with Copper8

8 cautiously positive lessons we can take from the Corona crisis